Review by Macy O’Hearn : Indiana Jones and the Temple of Doom 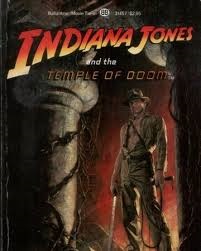 The film opens at a dinner party in Shanghai, 1935. We find Indiana sitting with mobsters, using a lazy Susan to play a game of back-and-forth. Except where you’d usually say, ‘Please pass the butter’, here it’s, ‘Please pass the priceless diamond and the cremated remains of an ancient emperor’. The dinner party ends as you might expect—with someone getting speared in the heart with a flaming shish kebab.

Indiana and his new companions, Willie and Short Round, unwittingly climb into a plane owned by the mob boss they just evaded. The three fall asleep mid-flight, and awake to the unpleasant realization that no one is flying the plane. They are forced to jump out on a raft, which inflates as they are freefalling. They land on a steep, snowy mountain, sled down it, fly off a cliff hundreds of feet high, and land in a raging river. And somehow Indy’s hat stayed on!

They come across a man in the jungle, who tells them that the folks at Pankot palace have stolen their sacred lingam stone, and all the children in the village have disappeared. Indiana miraculously speaks Hindi, and tells him they’ll go find it.

At Pankot palace, we see the decadence enjoyed by those accused of stealing the sacred stone—live baby snakes, eyeballs in broth, giant beetles, and for dessert, chilled monkey brains. After dinner, Indiana and Willie find a door leading to a dark passage filled with every crawling insect in the world, and one very claustrophobic booby trap. I distinctly remembered this film being difficult to watch, and now I’m suddenly remembering all the (many) reasons why.

In an underground mine, there is a gruesome ritual taking place. A cult leader sticks his hand inside the chest of a man and pulls his heart out, still beating, and then they lower him into a swirling pit of lava. Apparently Pankot palace is on top of a volcano.

We then find out that, surprise(!), they did steal the stone. After drinking a mind-controlling potion out of a skull and nearly dropping Willie into the lava pit, the three make a run for it, lingam in hand. Luckily, the three are eventually saved by the British Imperial Army, the lingam stone returns to its altar, and Willie’s hair returns to its impeccably coiffed state.

Is there an overarching lesson here? Maybe it’s to not steal things. Maybe it’s to not grossly misrepresent an entire culture on film. In the end, maybe the biggest lesson is that sometimes a flaming shish kebab can be used for more than just eating.

In conclusion: It had its entertaining moments, but this installment is even more stomach-churning than I originally remembered. I would say I saved the worst for last, but I’m not touching The Kingdom of the Crystal Skull.