Review by Macy O’Hearn : Indiana Jones and the Raiders of the Lost Ark 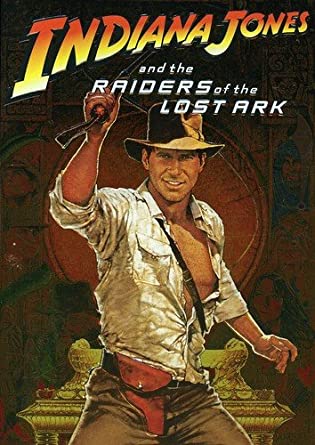 Indiana Jones and the Raiders of the Lost Ark (1981)

The film opens in 1936 in ‘South America’ (really… anywhere on the continent?).

Indiana is walking through the jungle and comes across the entrance to a tunnel, which contains just an unreasonable amount of spider webs. Honestly, I cannot think of a single artifact worth hacking your way through this creepy, crawly mess, only to then be faced with metal spikes and poisoned darts flying out of the walls. I think I’ll just wait outside, thanks.

Here we get what is probably the most famous scene in the whole series. You know the one—with the golden head and the giant rolling ball? I somehow remember this being a bigger plot point…

After Indiana’s jungle adventure, we meet up with him at school, where he is struggling to spell ‘Neolithic’ on a chalkboard. When class is over, two suited men tell Jones about a Nazi-led excavation in Cairo, where they’re searching for the Lost Ark of the Covenant. To find it, however, they’ll first need the staff of Ra, which has a crystal head that will illuminate the Ark’s location on a map—another ‘X marks the spot’ opportunity.

We then meet Marion, an old flame of Indy’s who just happens to have the head of the staff on a necklace (that’s handy!). After one absurdly long chase scene through Cairo, where Marion is ratted on by a monkey wearing a vest and then kidnapped in a giant basket by Nazis, Indiana takes the staff of Ra into the map room, where he triangulates the location of the Well of Lost Souls. Think of it as an old-timey, solar-powered Total Station.

Much to Indiana’s dismay, the Well contains thousands of poisonous snakes (also coming out of the walls), but fortunately, also the Ark, which Indiana and his buddy uncover with the greatest of ease. I’d like to note that there is no way two people would have been able to lift that stone lid. I did some research: A stone sarcophagus lid can weigh upwards of 3000 pounds, and these two lift it like it’s a flimsy folding card table (about 13 pounds, in case you were wondering).

Finally, we’re taken to some island, where the Ark is being opened. According to the Hebrew Bible, the Ark of the Covenant contains, ‘…the golden pot that had manna, and Aaron’s rod that budded, and the tablets of the covenant’. I definitely do not remember seeing anything about swirling, heavenly wraiths that will explode and/or liquefy you if your eyes stay open. But maybe it’s just a translation thing?

In conclusion: I’ll take one large popcorn, extra butter, and hold the flesh-melting ghosts, please. It’s another hate-to-love, thumbs-up from me.