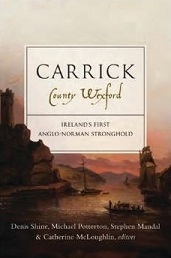 Considering the Decade of Centenaries and the apparent appetite for commemoration abounding at the moment, the 850th anniversary of the arrival of the Anglo-Normans on the shore of county Wexford has perhaps not received as much attention as it should have, considering they went on to have such an enormous impact on the landscape, politics and culture of the island. It has not gone unremembered however, particularly in the county of their arrival, where the ongoing ‘Digging the Lost Town of Carrig Project’ held a series of events including a recent conference where a book to make the event was also launched. Carrick, County Wexford: Ireland’s First Anglo-Norman Stronghold edited by Denis Shine, Michael Potterton, Stephen Mandal & Catherine McLoughlin (Four Courts Press, €24.95; ISBN: 978-1-84682-796-9), like the excavation project, is focused around the earthen ringwork castle that is the first recorded fortification of the invasion. Colfer and Colfer introduce the Anglo-Norman colonisation of Wexford, Potterton looks at its growth and decline in its first two centuries and Stafford looks at the archaeological evidence in both town and country. These chapters give a comprehensive background and context to both the site and the period making this an excellent introduction to the archaeology and history of the early part of the age. Focusing on the site of Carrick, Shine and McLoughlin outline its history, Shine et al describe the recent investigations at the site, McLoughlin and Green assess the landscape, archaeological and geophysical evidence for the manor and town and Beglane discusses its medieval park. The site is now situated in the Irish National Heritage Park and the excavation project incorporates an archaeological field school and these features are also covered in the publication. O’Brien, Mandal & Bennett examine the Crimean War memorial that was built on top of the site in the form of an early medieval round tower and Hayes shares a personal reflection of the heritage park, which first opened in 1987. Rogers et al describe digital approaches to interpreting the landscape around the site, while Mandal et al examine the field school model and what it has to offer. This book certainly has a lot to offer and in the same way that the Anglo-Normans used Wexford as a starting point for their colonisation, one could do worse than use this book as a starting point for learning more about its early centuries.