In January of 2018 the Digging the Lost Town of Carrig archaeological project commenced at Carrick ringwork (SMR WX037-028002-) in the Irish National Heritage Park (INHP), Ferrycarrig, Co. Wexford. The project, established as a partnership between the Irish Archaeology Field School (IAFS) and the INHP, aims to assess one of the most historically significant, but lesser known, medieval sites in Ireland. The Carrig project initially commenced as a major research excavation of a ringwork castle, and later castle/settlement (for more details see here), which aimed to draw the site into the park as a ‘key attraction’, in the process providing added economic and amenity value to the local community.

To further this aim we also established several experimental archaeology programs at the site in 2019, in partnership with Dr. Brendan O’Neill of University College Dublin (UCD). These programs provide a practical introduction to the role of crafts, technologies and construction techniques in Ireland through time, with a focus on the built environment and materiality in the later medieval period. It was also hoped that the programs would equip visitors to the site with a good understanding of medieval society in general, with a specific focus on the role of technologies and materiality in people’s lives at Carrick, as one of Ireland’s most important settlements. Experimental archaeology programs were our first venture into our Building the Lost Town of Carrig Project, which was a major founding aim of our partnership with the park.

Building the Lost Town of Carrig – Our Plans

In 2019 the experimental archaeology programs were our first foray to providing an interactive heritage experience on the site, which wasn’t solely focused on excavation. These programs were limited in their scope – such as making small clay features like furnaces, constructing medieval pottery wheels and throwing pots, or conducting smelts. However, each activity was inspired by our archaeological discoveries at Carrick, and all are crucial educational activities and visitor experiences. However, the project had ambitions to undertake much larger projects, with an overall aim of re-creating medieval society at Carrick. To this end we were delighted to attain permission from the National Monuments Service to undertake our first structural works in 2020 (subsequently delayed until 2021). These are being undertaken both within the ringwork and directly south of the monument itself.

Works within the Ringwork – strategy and aims

As we complete archaeological works and backfill the site (to preserve the archaeology) the site is hard to decipher for members of the visiting public. Due to the position of the site in an open-air museum, and as identified in our Management and Conservation plan, we consider it crucial to mark significant archaeological features within the ringwork on the surface, starting with the presumed 14th century masonry buildings.

As such we will construct ‘new’ walls on top of the line of the 14th century structures – separated by a clear barrier. These walls will be low in height, intended to only mark the outline of the buildings. The works will be coordinated by traditional stone mason Patrick Hickey (in consultation with the IAFS) over a period of years, using only traditional techniques and materials in keeping with the site. Patrick was previously commissioned to conserve the stonework of the ‘faux’ 19th century round tower at the site (amongst other regular commissions, both for the INHP and throughout the southeast). We are incredibly excited both to work with Pat and start work which has been years in the making. To date we have already completed a geological survey of every stone in the exposed medieval walls (this is published in our recent Carrick volume), and carefully retained all stone above above c. 0.1m³ since the start of the archaeological excavations. This stone derives from the quarrying of the medieval ruins at the site in the 19th century and will be repurposed to form the core of the replica walls. The INHP have also constructed and trialled the use of a medieval mortar mixer, while Pat is currently experimenting on clays from the site. We have the materials and infrastructure  –  we just need to start constructing the walls!

Works outside the Ringwork – strategy and aims

In 2021 we will also construct the first ‘medieval’ building at Carrick in 700 years, when both a sunken floored smith’s house and a pottery wheelhouse will be built. The medieval smith will be based on excavation results from Lowparks, Co. Mayo and measure approximately 4m by 6m. The construction of this building will require the setting of posts, construction of A-frames, shingle roof and post and wattle sides. While incredibly challenging for our students and volunteers the buildings will be overseen by Dr. Brendan O’Neill as authentic examples of medieval structures. The pottery wheelhouse will be constructed according to a similar methodology, with both buildings then acting as live spaces where medieval smithing and pottery manufacture can take place – our first permanent ‘medieval’ technologies at Carrick since the 14th century.

As with the construction of walls within the ringwork, planning for the smith’s house has been a long time in the making. In 2020 we hand-cleared an area south of the site of vegetation before excavating a 10m by 8m cutting, which we confirmed as devoid of archaeology. This area will now house both the smith’s house and pottery wheelhouse, but also small industrial structures, such as seasonal stand-alone furnaces, smithing hearths, post and wattle pens to hold materials, medieval mortar mixer etc. This craft area will expand with the project and allow us to carefully separate the reconstructed and replica activities from the real archaeology.

Building the Lost Town of Carrig – A Unique Venture

The Building the Lost Town of Carrig venture is exceptional in its both structure and intent. What makes this program unique is its collaboration with leading experimental archaeologists and tradesmen, Ireland’s largest open-air museum and, crucially, a major archaeological research project – Digging the Lost Town of Carrig. The experimental archaeology program is delivered adjacent an authentic ringwork castle (the Carrick ringwork), one of Ireland’s most important medieval monuments being the first Anglo-Norman fortification built in the country in 1169 AD/CE. Archaeological excavations at the site by the IAFS since 2018 show that significant evidence of the site’s medieval history is preserved below the ground – including remnants of a 12th century fort with wooden structures, 13th century stone castle and 14th century hall and chapel. As the archaeologists uncover the history of both the site and its wider medieval landscape the results are communicated in almost ‘live time’ to students of our Building the Lost Town venture, underpinning their projects with exceptional authenticity and added significance.

A further strength of the program is the partnership with the INHP, a 35-acre open-air museum depicting 9000 years of re-created history, from first settlers to the coming of the Anglo-Normans. The program is also partnered by Dr. Brendan O’Neill (UCD), one of the world’s leading experimental archaeologists. Arising from the strengths of the partnership between the IAFS, the INHP and UCD this is a truly special project, which will develop gradually over the next few years, as the excavations at Carrick reveal the scale and nature of the medieval settlement. However, in time it is hoped that a faux medieval settlement full of life and craft, will be built in the INHP directly based on the archaeological findings. Students work on these early projects are a crucial first step in this process, and actively contribute to a lasting legacy as an educative resource – allowing future visitors and students a chance to better comprehend the history of this most important site and medieval society in general. 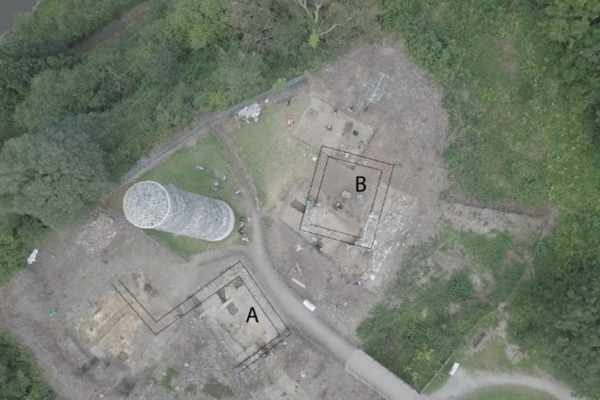 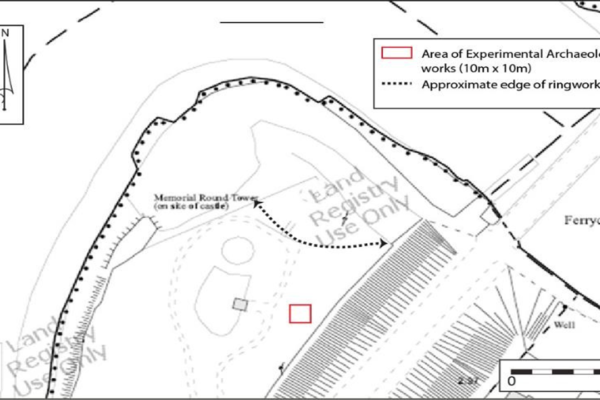 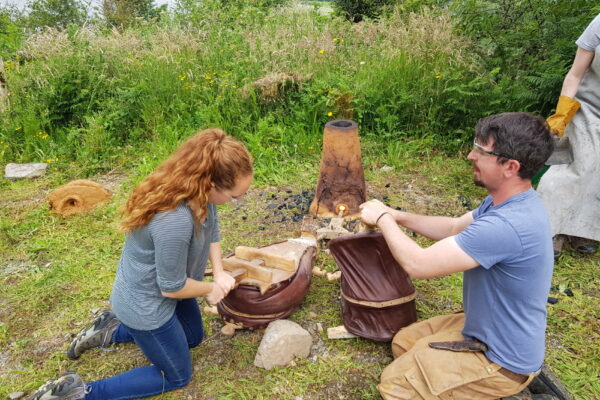 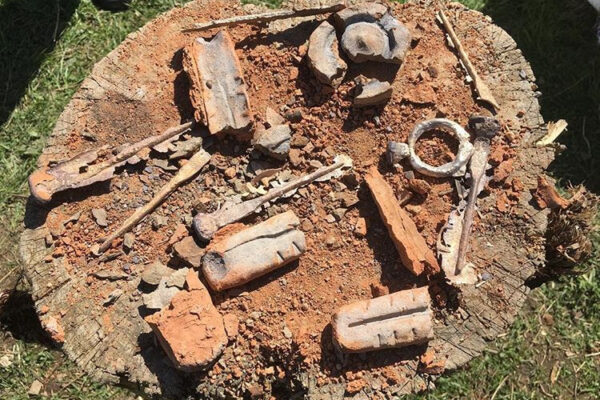 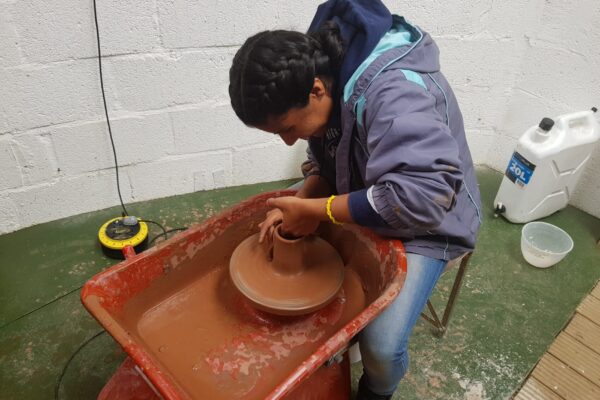 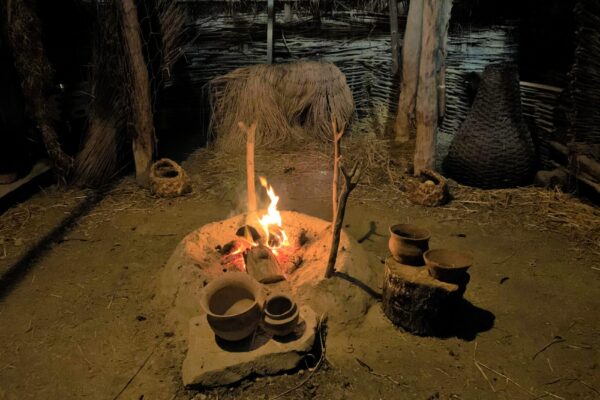 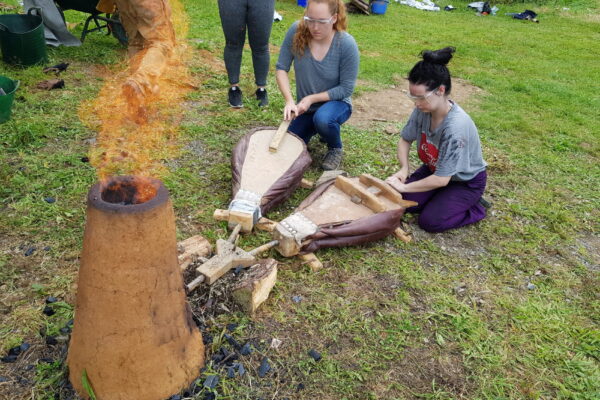 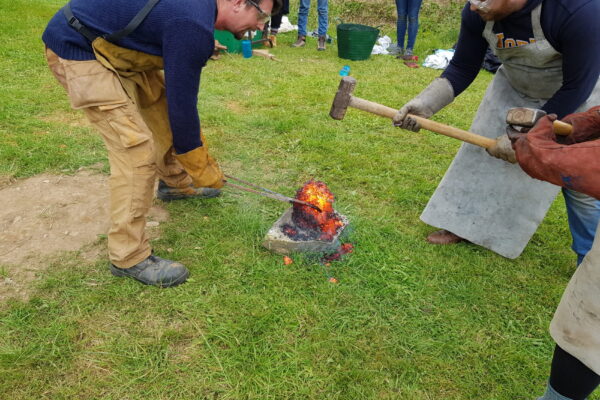 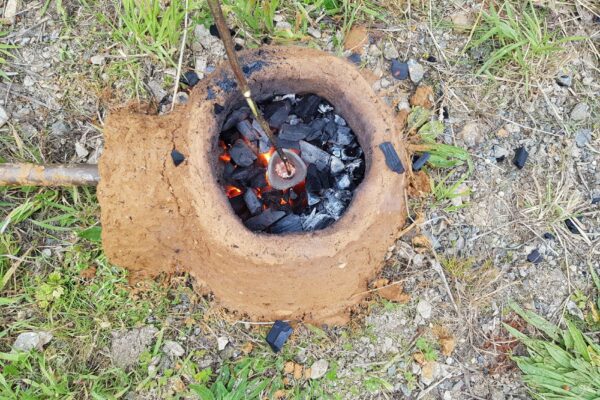