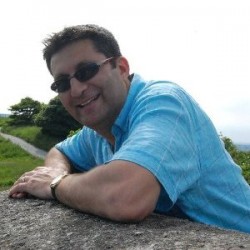 Steve is passionate about the outdoor classroom and active, tactile learning. He has dedicated his career to bringing the Irish landscape, archaeology and history to life for all, from early school children to university students to culturally curious retirees. Steve is the co-founder and CEO of the Irish Archaeology Field School (2005), the Irish Heritage School (2016), Cultural Tourism Ireland (2010), Dig it Kids (2011) and CRDS Ltd (1997). He co-founded two highly acclaimed community-based research and education projects, the Digging the Lost Town of Carrig Project and the Blackfriary Community Heritage and Archaeology Project and has presented academic and public talks on the projects in Ireland and internationally, including to the Smithsonian Museum and the Archaeological Institute of America.

Since 2015, Steve has served as an international guest speaker for the Archaeological Institute of America’s lecture program. In 2018, he was appointed to the Cultural Heritage Advisory Panel for the Dublin City Council Culture Company. In 2019 Steve was appointed to the executive board of the Discovery Programme, the state centre for archaeology and innovation in Ireland. Also in 2019, he was appointed as a Research Associate of the Smithsonian Museum.

Steve served as Vice-Chairperson of the Royal Irish Academy Committee for Archaeology from 2009 to 2014.  From 2012 to 2015 he was the External Examiner in Applied Archaeology at Sligo Institute of Technology. In 2013, he was appointed to a European Commission DG Enterprise Project to review cultural heritage tourism across the European Union. Steve served as financial advisor to the WAC-6 (2009).

Steve is an expert guide and travel planner and has led several special interest tours of Ireland’s archaeological heritage. Steve is a Heritage in Schools Expert and teaches in-school archaeology education programs. He also run hands-on educational camps, workshops and events for children and educators.

Steve spent two years as a post-doctoral research fellow in the Archaeology Department, University College Dublin, during which time he also undertook a research fellowship in Bologna, Italy. His main research interest is the use of stone in archaeological contexts, and he is the geologist for the Irish Stone Axe Project, co-authoring with Prof Gabriel Cooney the Project Monograph in 1998. Steve has contributed geology and geoarchaeology chapters to several books and authored numerous academic papers.

The 2020 programs will run in Winter (January/February), Spring (March) and Summer (June/July/August). Please refer to our Programs page for further information.