In November 2020, the Irish Archaeology Field School/Irish Heritage School were commissioned by Offaly County Council to undertake a community programme of works focused on the site of Blundell Castle in Edenderry, Co. Offaly – a multi-period structure that was possibly first documented as early as 1416 (see a more detailed archaeological description below). The project received funding through the ‘Keep Well’ campaign, which was created as a result of the Covid-19 pandemic to help people keep active and outdoors, stay connected, remain creative, eat well, and mind their moods! The scheme, with advice from Creative Ireland, has resulted in a range of initiatives to support individual and community creativity in the arts, crafting, culture and heritage.

The scheduled works at Blundell were initially intended as participative community site works as well as a series of educational events. Public health concerns associated with Covid-19, saw the program of site works successively delayed through the spring of 2020 before project was reconsidered to be delivered mainly online – across three or four key initiatives: 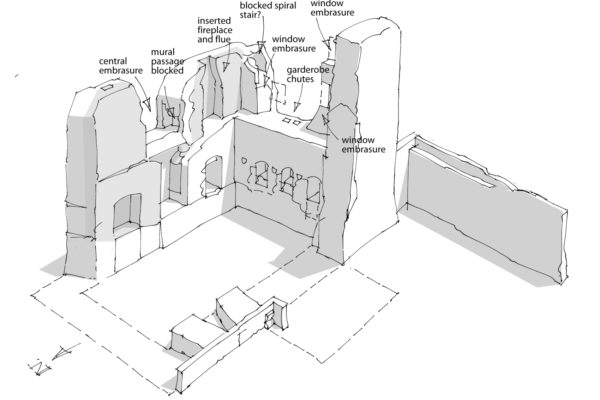 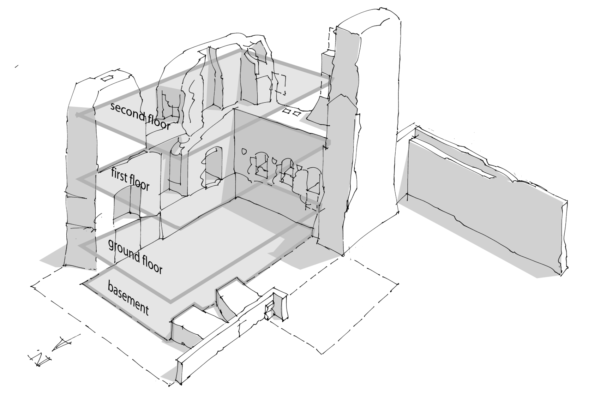 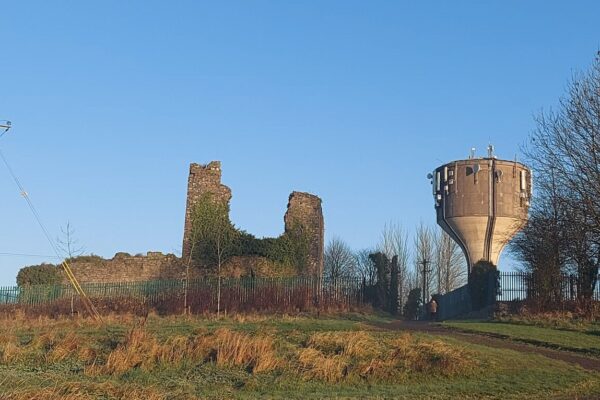 We are hosting a virtual lecture and information evening, in partnership with Offaly County Council, on Blundell Castle, scheduled for Monday, May 31 from 6:00-7:30pm. This evening will include a talk on the wider historical and social context of castles like Blundell, as well as a short presentation on the current site works and plans for the site into the future. To reserve your place, be sure to register now through the link below!

A virtual ‘Understanding Life in Medieval Times’ schools’ event will be offered to schoolchildren in Edenderry on Saturday, May 29 from 12:00-1:30pm. This event, delivered by heritage educators ‘Dig it Kids’ is aimed at 6 to 12 year olds and will include a brief introduction to Irish castles like Blundell, with students also learning about the origins of chivalry and heraldry in medieval Europe. The children will even get to create their own family crest using colours and symbols that represent their values! To secure your place, be sure to register through the link below! 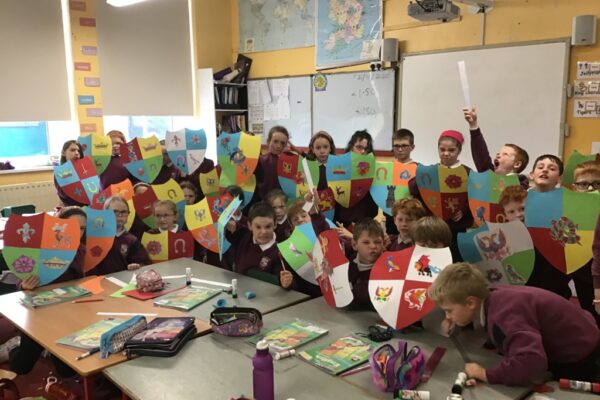 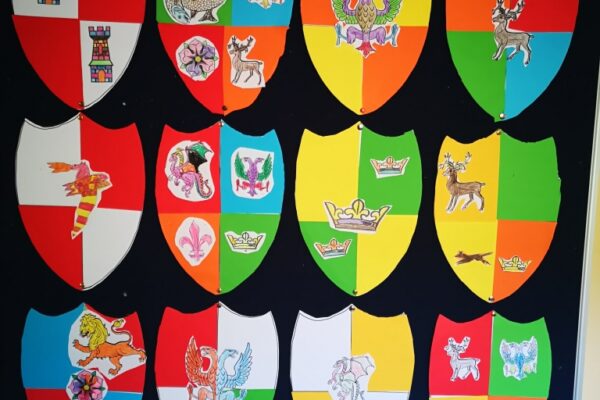 We are keeping the possibility of a site tour(s) open to review based on the developments with the Covid-19 pandemic in the coming months.

In the recent past piles of stone, collapsed from the structure of Blundell Castle, leaf litter and modern refuse have accumulated along the base of the walls at Blundell castle, notably along three walls of the main structure (see below images). This material will be pulled back to the level of the ground surface (which will not be disturbed) under expert archaeological supervision with a license for the works (license no. 20E0726) secured from the National Monuments Service in mid-December 2020. The piles on site will then be sorted to separate modern refuse stone and any modified/architectural stone. While the waste will be disposed of off-site, the stone will be retained at the site, with a full pictorial and written record taken off any architectural fragments. During works any scrub vegetation which is impeding the excavator, will also be carefully removed, after being cut – with the site currently overgrown with thorns and young alder bushes, which have ‘wild-seeded’. An initial clean of the site and the removal of some vegetation was already completed in December 2020. Site works were completed in early June 2021. A full clean up was done, including removing all modern refuse, and recovering and consolidating all of the rubble on site, which has collapsed off the castle walls over time. 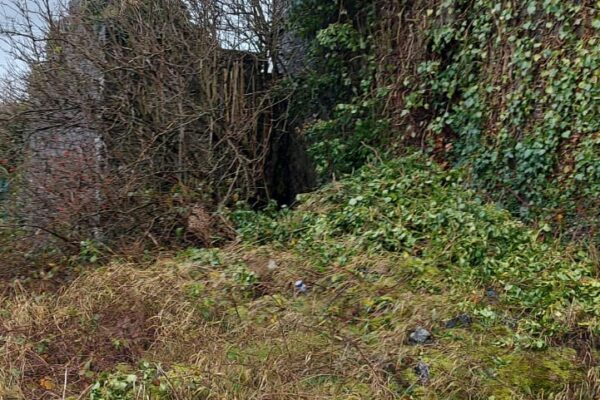 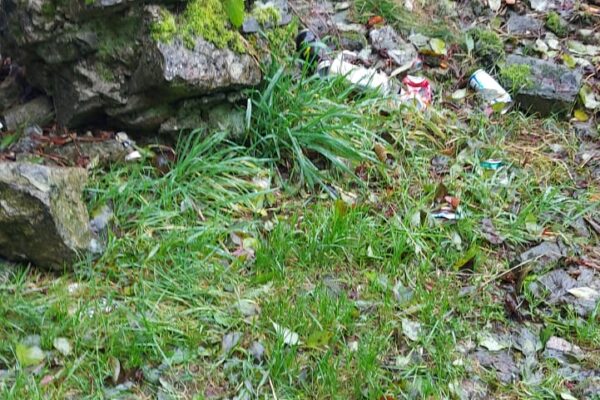 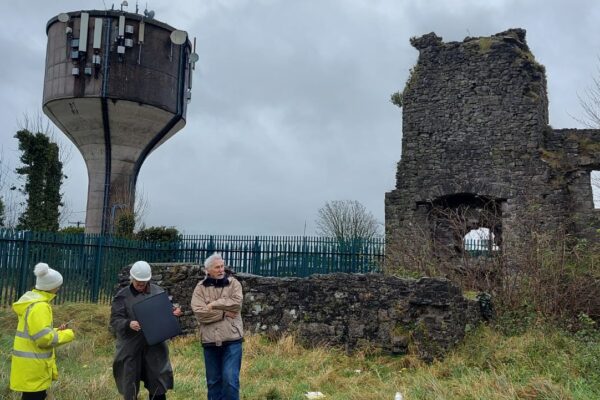 Brief History of the Castle

According to the Annals of Connacht in 1416 ‘The castle of Edenderry was razed by [lord] Furnival [John Talbot, 2nd earl of Shrewsbury, lord lieutenant of Ireland] at the beginning of winter’. In 1427 the Annals of Ulster record that ‘The castle of Edan-daire in Offaly was broken down by Foreigners [Gallaibh – Anglo-Irish] this year.’ By the sixteenth century the castle had become the residence of the Colley [Cowley] family after whom the barony of Coolestown [Colleystown] received its name. Described in the 1550 Survey as ‘the castell of Eadendyrre’ (Curtis 1930, 325). Originally an O’Connor castle that was taken over by the Cowley family after Henry Cowley [Colley] was granted the land in 1562-3 (Anon 1907 vol. 37, 416). In 1562 the English government granted to Henry Cowleye ‘of Castlecowl[eye]; of the castle of Eddendirry alias Cowleystone, King’s co.’ (Nicholls 1994, vol. 2, 53).

On the Hill of Edenderry, now the churchyard, there was formerly a Silver mine, twice attempted to be worked, but not within these forty years (Coote 1801, 124). It is unclear where on the Hill or how close to the castle these silver mines were operated from and if so what earthworks they would have left behind or what shafts may have been excavated in the vicinity of the castle. Are the quarry holes shown on the first ed. OS map to the northwest of the castle part of this silver mining operation? Are they the remains of what Coote described as ‘In the mine of Edenderry has been found that stratum of yellow clay, the indication of lead mines; a sample of the ore is to be seen in the society’s Museum’ ?(Coote 1801, 125-6).

On the 1838 OS six inch map there are silver mines shown to the NE of the castle just off the main street of Edenderry. This silver mine is in a different location to the silver mines described by Coote.

In 1917, Harold Leask stated that the castle does not ‘appear to have been vaulted and contains no special feature of interest. The remains seem to be those of a XVIIth cy. House. Part of the bawn walls remains’ (JKAS VIII, 386). In the late 1970s the OHAS described the castle as consisting of ‘Walls standing on the South and east side apparently a spiral staircase on the East wall. Three floors in main section i.e. that where walls are standing. Base Batter, extensive foundations at front of castle. Foundations of walls standing, difficult as to what sort of building the foundations indicate. No definite shape.’ (OHAS files) Jim Reynolds in his site report of 1981 states that ‘Fragmentary remains to the West indicate that a range of buildings existed here’, these may be the remains of the late seventeenth house known as ‘Edenderry House’ that may have been added on to the southwest angle of the earlier castle. On the 1913 edition of the Ordnance Survey six-inch map the castle is depicted as a rectangular structure orientated north-south with a possible angle tower or building on the southwest angle of the castle. Reynolds noted in his 1981 report that the ‘ground surrounding the site to the North and West has recently been levelled and is now strewn with builders rubble’ (ASI archives). In 1991 David Sweetman describes a ‘later building tacked onto SW angle’ (ASI archives).

According to W. A. Maguire in his article ‘Missing persons: Edenderry under the Blundells and the Downshires, 1707-1922’ in Offaly History and Society ‘The damaged castle was not rebuilt, but a residence referred to in a letter of 1720 as Edenderry House was apparently erected.'(p. 517) The 25 inch Ordnance Survey Map of Edenderry clearly shows a wall return running west off the centre of the west wall of the castle, this may be a building or angle tower on the southwest angle of the castle. It could also be the remains of the seventeenth century house known as Edenderry House that may have been built onto the southwest angle of the castle.