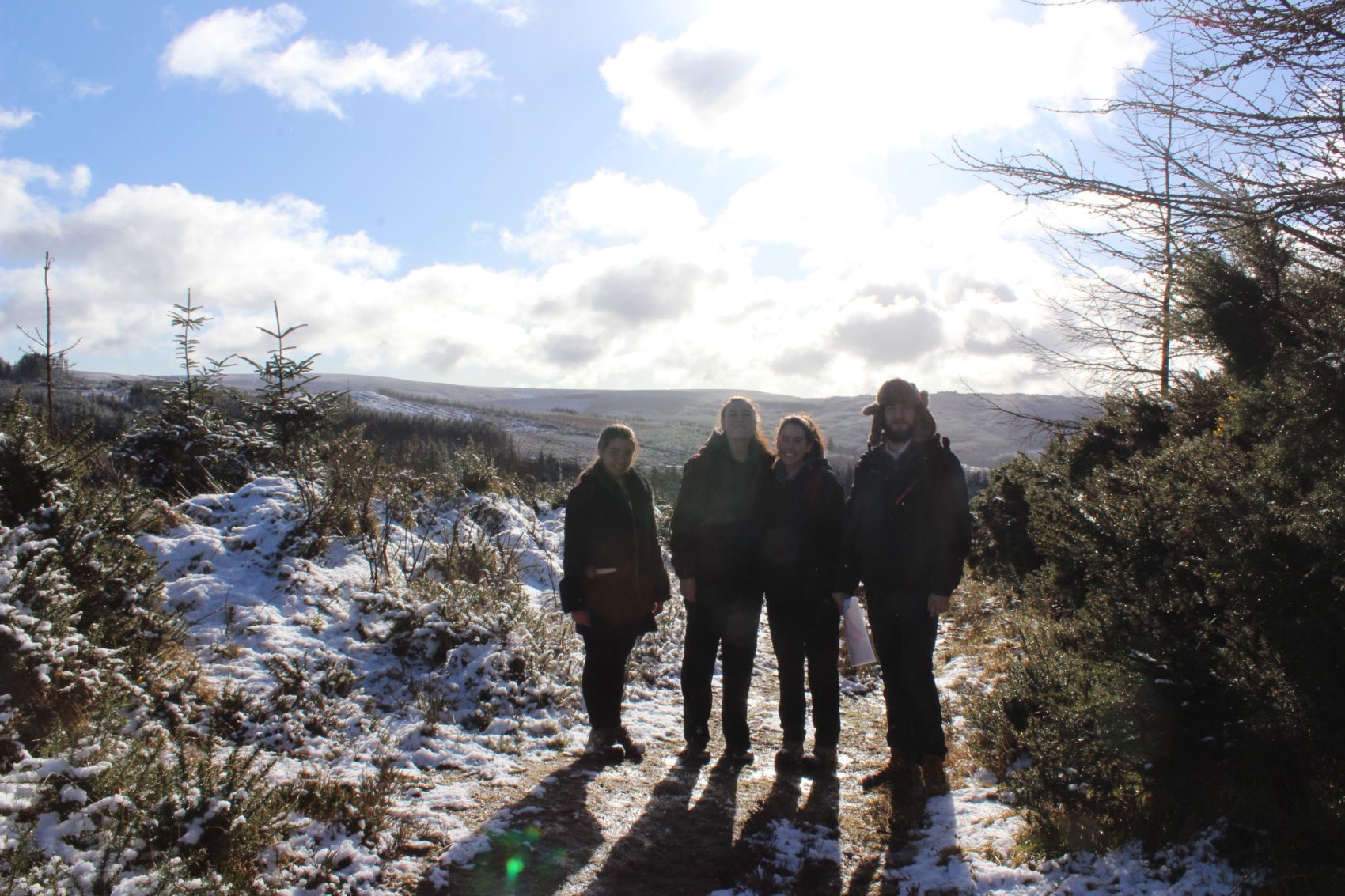 Grace (second from left) hiking in the Slieve Bloom mountains, as part of an exercise on conducting Archaeological Impact Assessments

My first experience with the Irish Archaeology Field School (IAFS) was in 2017 when I came across from Australia as a student on a four week excavation program. As an introduction to both Ireland and field archaeology this four-week program was one of the best life decisions I made. Under the guidance of Denis Shine I learnt the necessary skills every archaeologist needs for the field, how to draw section plans, how to photograph cuttings and finds, how to catalogue finds in a large database. Outside of the practical archaeology we toured the countryside with Stephen Mandal and learnt about the cultural significance of the site and the history of the region. On a personal level I made – what I hope to be – lifelong friendships with students and the IAFS team. The experience as a whole was eye opening and so enjoyable, I found myself returning numerous times.

In 2018 I returned as a Teaching Assistant For the IAFS. I arrived as the set up for the new field school at Carrick was just beginning. On my first visit to the site I had just arrived in the country after a 23-hour flight from Australia, we pulled up at the Irish National Heritage Park (INHP) in the late afternoon and all jet lag seemed to fade away for a moment. The evening air was brisk and the sun was hiding behind clouds adding to the ambiance of the park. The walk up to the site took my breath away, we passed a large Cránnog perched in the centre of a small lake, and a Viking Hall and Long Boat which sat on the bank of the River Slaney. After a steep climb to the top of the hill I saw the site for the first time. It didn’t look like much, covered in leaf litter, twigs and branches. There was a large round tower in the centre, a monument to the Crimean War, and a large ditch, which was the clearest visible evidence of the site. We toured the indoor facilities where the ‘Big Dig’ – a children’s archaeological education centre – had once operated; it was simple and only half finished but it already showed so much potential.

Over the weekend myself, Maddy (an archaeological intern) and Denis started to organise an office space, setting up printers and shelving for the site library. Once the students arrived on the Monday the clearing of the site began, over the next four weeks the site went from its earliest beginning stage to a clearly defined area with Cuttings 1 and 2, containing 12th to 14th century archaeology, being excavated by the students. I like to think that the first group of students and interns did a good job setting up the project for its future. When we weren’t in the office or on the site, we all got to explore the area around Wexford. This included a visit to Hook Head Peninsula and the Hook Head Lighthouse, where we learnt about the greatest knight of all time, William Marshal. Denis spoke to me and Maddy about our future studies and the pathways we might take. I was hooked and began setting up my Masters project with Denis during this time!

In 2019 I returned to Wexford to conduct a study on the ringwork castles of Co. Wexford, assisted by the IAFS and the INHP, for my Masters project. I undertook my Masters in Archaeology and Heritage Management at Flinders University, South Australia. If it were not for my relationship with the IAFS, particularly Denis Shine, I would not have been able to conduct a research project on the other side of the world. From the planning stage to the field work stage Denis Shine and Richard Reid (IAFS Site Supervisor) were heavily involved, ensuring the project had the best chance at succeeding. In October 2019 the findings from my research were presented in abstenia at the Carrig 850 international conference.